I have found hope for the future. I can say now that I am grateful for your intervention.

We would like you to meet volunteer chaplain Lindsay and Jonathan. 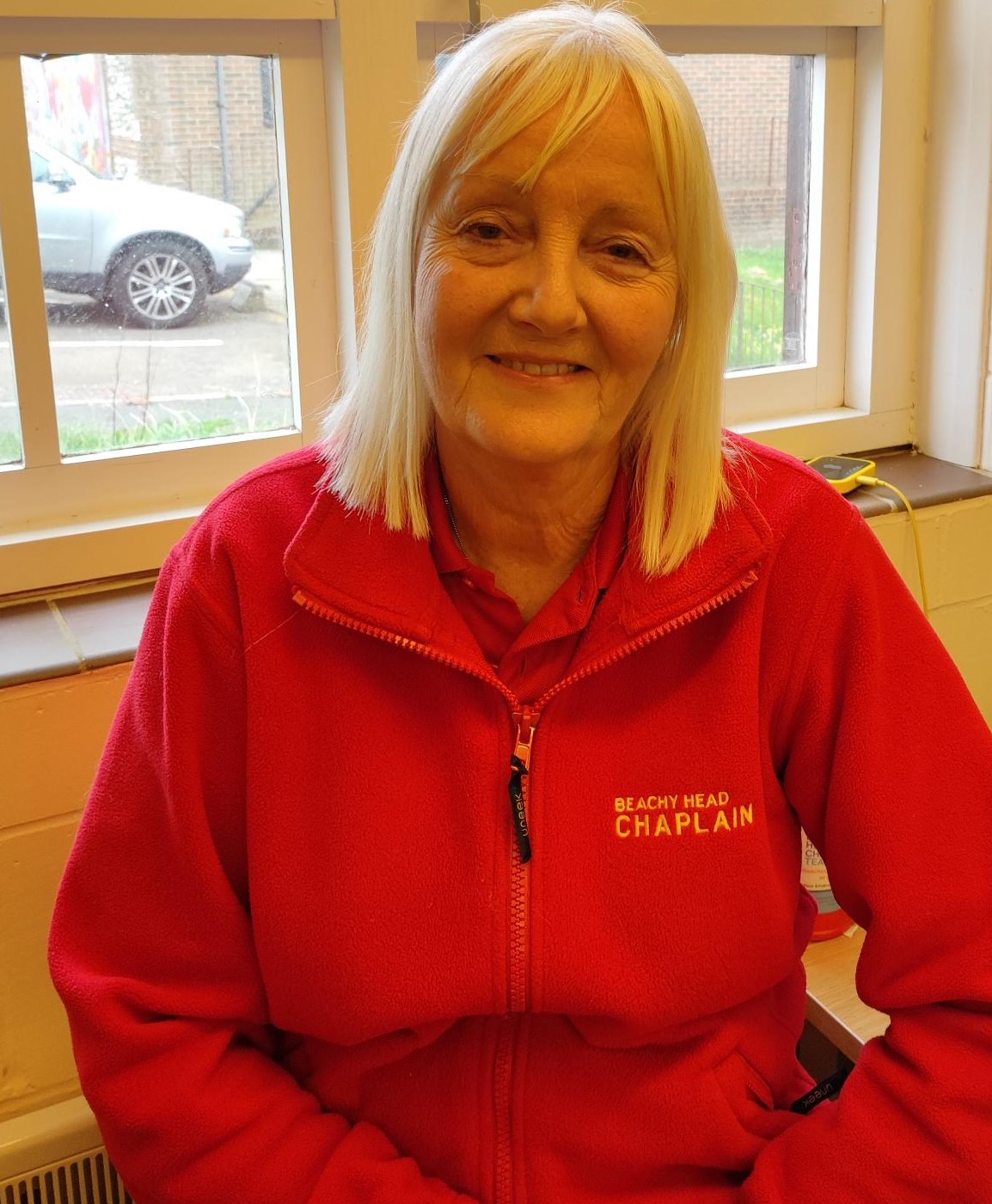 That Sunday I went to my Church and they had various Charities from the local area exhibiting. My heart was immediately drawn to the team at the BHCT stand. I went over and prayed for the team and explained that I was very interested in joining the team. I was aware of what the Chaplains do at Beachy Head as my friend Annie was already a chaplain. Over the coming weeks I prayed and many times I felt the Lord confirmed to me that I was being called to volunteer for Beachy Head Chaplaincy Team.

I received an application form and within a few months an interview was arranged. At the interview I believe the Lord confirmed to me again that this was the place he wanted me to be. I was overjoyed when my interview was successful and I was placed on the next BHCT training course in October 2017.

For me my Christian faith always helps me in my role as a Chaplain at Beachy Head. I have a personal confidence knowing that I can rely upon the Lord in everything I do. I’m confident that every shift I am doing something worthwhile and helping people get back to safety and regain hope in their lives.

The most important characteristic in deciding to become a chaplain is that you must believe you are called to do this work. We are there to serve others in all weathers and for some in the most difficult of crisis of life situations.

There have been lots of times in he past 5 years where I have met people who have struggled their whole lives with problems which they no longer want to carry as a burden. These people are what I believe I am really there for. It’s a genuine blessing when we approach people at Beachy Head who have lost hope and are in the darkest of places in their lives and they want to talk to me as a Chaplain and share their stories and their burdens.

I am able to say genuinely to that person that I genuinely care, I want to understand what is burdening you and that you matter, tell me your story. I really do mean it. For that person it may be the first time they have truly been able to speak about their deepest hurts. I can empathise with and really listen without judgement to those I meet at Beachy Head. I have a genuine heart for the people I meet on my shift. It’s a privilege to be there in their time of need and hear their story.

Taking someone back to a place of safety and them calling their loved ones to tell them they are safe is for many the start of the road back to healing and a full and healthy life. It’s such a privilege to hear them say……..It’s OK the Chaplains are here! 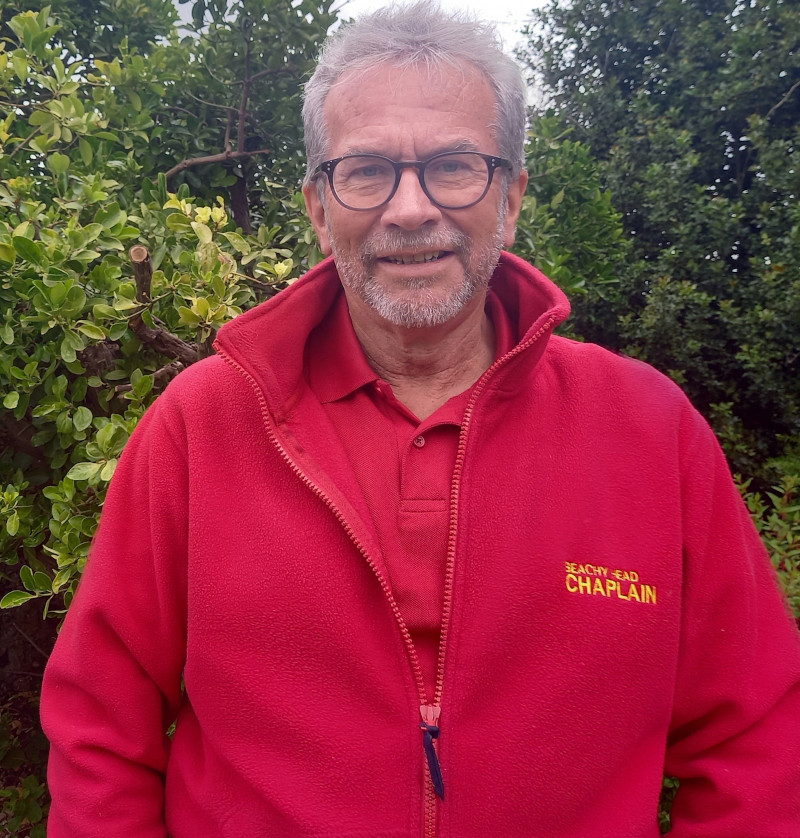 I came to faith in 2004, quite late in my life, at a time when I was feeling a loss of purpose and direction having gone through some challenging times. I responded to a small notice advertising the Alpha course as I felt I was searching for some meaning and answers in a deeper spiritual sense. After the course, I accepted Jesus as my Lord and Saviour and have allowed Him to shape the direction of my life ever since.

I was asked by the Rector of the church I was worshipping at if I would lead a small team, from the church, on a mission trip to Rwanda. I had worked for 35 years in the international event business, organising many events for large corporate companies, so had experience of working overseas. The first team went out in 2007 and I subsequently organised a number of other mission visits, including two youth teams, as well as teams from two other churches in the UK.

Rwanda had a profound impact on my life and faith journey. In 2011, I felt a sense of God calling me to serve Him in Rwanda on the mission field. It took me 2 years to explore and discern this calling before I went to Rwanda in 2013 initially for 2 years but stayed for 4. When I was in Rwanda, I met the CEO of an African Christian Community Development Organisation who I now work for since returning to the UK in 2017.

During the periods of COVID lockdown, I began to think about getting involved in local outreach mission as all my experience had an international focus. In December 2020, CEO Gerry Howitt spoke about BHCT at our church monthly mission prayer meeting and I was struck by the similarities between what went on at Beachy Head and what had happened in the 1994 genocide in Rwanda – the beauty of a location/country verses the darkness and brokenness that can pervade it. I felt a strong sense of God prompting me to pray about applying to become a Volunteer Chaplain, which I did over the Christmas season and then applied in the new year and got accepted for training.

Working as a Chaplain is so different from my current full-time job and the work I have done for many years. I’ve not had any experience of front-line response activity so have had to learn a new skill-set including becoming a better listener and being ready to respond to many different, and often difficult situations and scenarios. Being a Chaplain has helped me to get a better understanding of the mental health and other challenges that so many people in the UK face and to respond with empathy and compassion. I also enjoy working as part of a support team alongside other chaplains as well as police and mental health services – each playing an active and important role to those who come to Beachy Head.

Put your skills to good use. Volunteer to join our team and make a lifesaving difference. Whatever your speciality whether its social media, fundraising or administration we would love to hear from you.

Donate Now Help us save lives